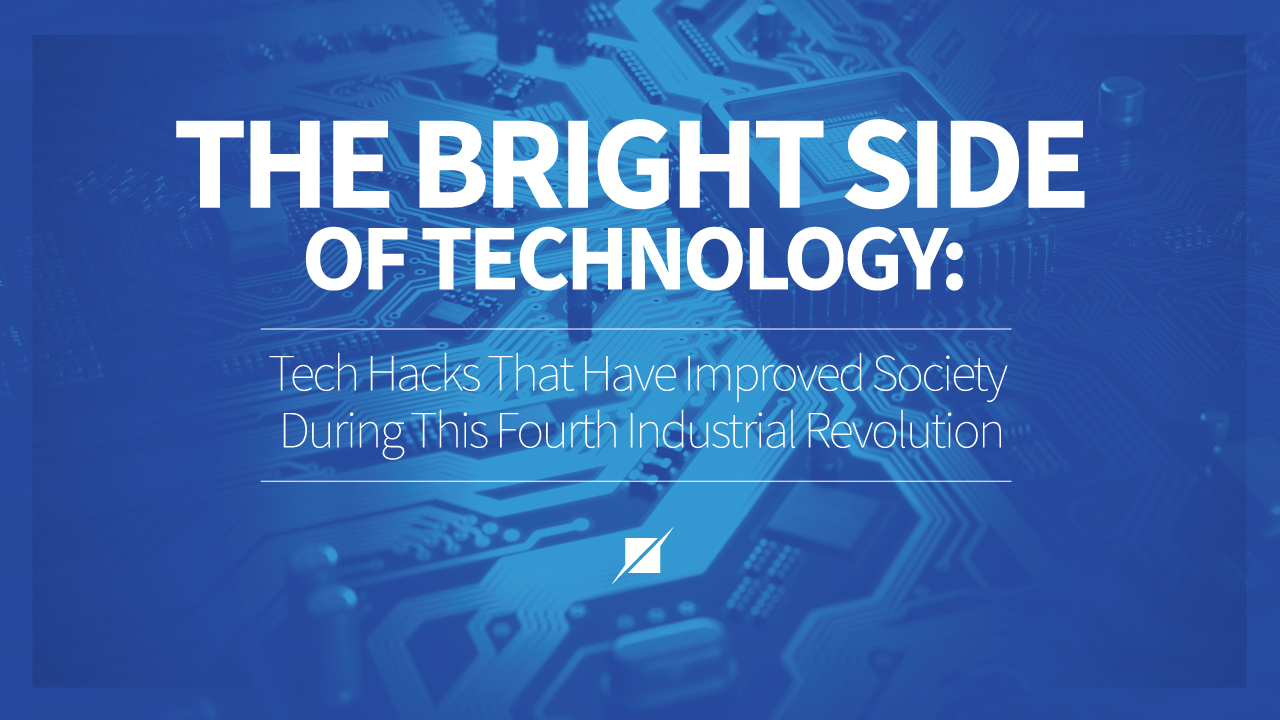 The Bright Side of Technology: Tech Hacks That Have Improved Society During This Fourth Industrial Revolution

Even when the developments might’ve been considered fairly primitive by modern standards, technological progress has always been a definitive characteristic of humanity.  Like any new tool, technology has infinite capacity to be used in all the wrong ways—in this, atomic and biological weapons come to mind.  And even with better intentions, sometimes technological impact can still skew negatively, such as when society’s immense reliance on it harms our environment, health, or thought patterns.

Yet there is a second face to this coin, with just as boundless potential—use for good, in intentions and impacts alike.

There is the side of technology where good ideas and honorable intentions do indeed produce spectacular results and, in turn, help humanity evolve positively.

There is the side of technology where good ideas and honorable intentions do indeed produce spectacular results and, in turn, help humanity evolve positively.  These developments enable citizens to succeed more easily while upholding the most harmonic, peaceful, and visionary values and ethical standards.  While in pursuit of this bright side of technology, we may never actually reach the end of the road with the possibilities and benefits—it’s both exhilarating and endless.  One thing we can be certain of, however, is that technology has the ability to consistently affect transformative social reform.

In fact, within the series of articles entitled “The Network Revolution,” AIMatters chief executive officer (CEO) Barry Libert and his three co-authors argue that embracing this social change is a theory of being rather than one of change—“one that places a virtual network of individuals seeking social change at the center of everything and leverages today’s digital platforms (such as social media, mobile, big data, and machine learning) to facilitate stakeholders (contributors and consumers) to connect, collaborate, and interact with each other to exchange value […] to effectuate exponential social change and impact.” Though technology has already gained some ground in the improvement or eradication of certain community and social issues, including those outlined below,  there is a ways to go yet.

It’s estimated that 11% of the world’s population still goes to bed hungry each night, but with any luck, that won’t always be the case—especially given technology’s impact already in genetic engineering advancements and improved farming methods.  More “smart farming” solutions have been made possible thanks to the Internet of Things (IoT), and upgraded livestock monitoring and soil measurements, among other improvements, are helping to upgrade the efficiency, quantity, and affordability of food sources. In addition, technology on a wider scale has also created more jobs and extended job markets across the board, especially through remote work; now, thanks to the Internet Age, promoting digital literacy and internet access ensures greater opportunities for people to support themselves and elevate their financial status. As more advancements like these continue to expand resources, that 11% number will hopefully continue to steadily dwindle.

The statistics are sickening: modern slavery exists in over 165 countries in the world and annually generates $150 billion in profit. According to the 2018 Cocoa Barometer, as many as 2.1 million underage children are forced to work in West Africa alone. Unfortunately, technology has played its own ugly part in allowing for the exploitation of these children, along with those others that have been sexually abused across the world and had their images spread. Nonetheless, it’s also had a hand in trying to curb these terrible industries.  The non-governmental organization, Thorn: Digital Defenders of Children, fights back with deep learning and artificial intelligence (AI) solutions to identify the most vulnerable victims of child abuse and upend the platforms spreading illegal content, all while developing awareness campaigns in order to hamper abusers.  Its flagship product, Spotlight—a data archive containing escort ads, photographs, and forum data gathered off the internet—uses algorithms to analyze and proactively generates leads and potential profiles, helping law enforcement find kids faster.  Since being founded in 2006, Thorn has identified nearly 10,000 victimized children in total.

Further efforts have to be made to continue eliminating such treatment of fellow human beings—both children and adults trapped in these unconscionable conditions.  New smart procurement technology has proven a great tool, as it enables major companies to more comprehensively analyze supply chains while pairing with third-party data for better evaluations and increased transparency. Amit Mondal, vice president of Software Development at PowerSchool Group, also points out how technology also helps to foil policy brutality, kidnappings, and incidents of rape: “Glasses or IoT-enabled personal devices with face recognition technologies connected to a database of criminals may be able to proactively warn when known offenders are in close proximity; peer-to-peer, location-based emergency communication technologies can enable victims to seek help from law enforcement or others nearby."

While the use of some technologies has been paralleled with our abuse of the earth’s resources, the other side of that coin has also given us options for fighting against the mammoth problem we’ve brewed up—climate change.  “Technology can help out in myriad ways,” points out Forbes Technology Council member Leah Allen, “From making electric cars mainstream and building alternative sources of energy to replace coal to creating more efficient buildings, non-polluting air conditioning systems, and desalination systems.” Back in 2016, solar energy became the world’s cheapest energy source, made possible by the evolving technology that drove costs down. As it represents a more economical and environmentally friendly choice, the switch to renewable energies wherever possible should be a no-brainer.

Richard Margolin, chief technology officer (CTO) and founder of RoboKind, points out that apart from mere accessibility, technologies like online courses and classroom robots “allow for a higher-quality and standardized delivery of curriculum by experts who really understand the subjects being taught,” which in turn “dramatically increases access both for urban and rural classrooms that lack the resources to maintain a well-trained staff.” And it’s not just important for educating children—Siddharth Banerjee, of Indusgeeks USA Inc., commends the potential of virtual reality, showcasing it as a transformative tool for training workers displaced by automation, as it enables them to learn new skills more efficiently and effectively, with “VR-Cades” circumventing expensive trainings to save money and time.

Yes, smart classroom technology eliminates physical boundaries and limitations for both students in school and those already in the workforce.  It opens a world of possibilities with developments in cloud, video conferencing, faster internet, advanced network coverage, budding virtual reality, and wireless technology that allows people—especially those in more remote locations—unprecedented access to a greater quantity, quality, and personalization of classes, schools, and subjects.  Those who can’t afford or are otherwise unable to enroll in a school also have access to a plethora of cheaper or free online material, including self-teaching courses via YouTube, Wikipedia, and digital libraries.

Smart and strategic use of technology in the health care sector can do, and already has done, wonders for patient outcomes, hospital savings and efficiency, and research across a plethora of fields.  It begins with a better understanding of biology and genomics, which then leads to better drugs and preventive measures.  With further sufficient advances, we may soon discover cures for currently incurable diseases—we’ve done it before (goodbye smallpox), and we can do it again.  In fact, many diseases, including hookworm, malaria, measles, and rubella, among others, are already well on the way out the door completely, having already been eliminated from large regions of the world.

"...technology is already breaking barriers at every turn, and will continue to do so as we progress."

Furthermore, blockchain technology can be used to resolve security, scalability, transparency, and privacy issues within the sector.  IoT wearables can provide user-generated health data to detect issues earlier and alert emergency services faster. With tools such as artificial intelligence and robot-assisted surgery (improved diagnoses and performance), virtual health care (improved accessibility, efficiency, and speed of care), nanomedicine (improved and more precise targeting and delivery systems, helping combat more complex conditions like cancer), virtual reality (improved worker training and offering patient therapy and rehabilitation), and 3D printing (improved prototypes and revolutionized transplants and tissue repair), technology is already breaking barriers at every turn, and will continue to do so as we progress.

Today’s world is in the midst of the Fourth Industrial Revolution, or what World Economic Forum founder Klaus Schwab defines as the fusion of technologies blurring the lines among the physical, digital, and biological spheres. Unlike any of those before it, this revolution is one in which digital networks are upending traditional business models, enabling new ways of sharing, distributing intelligence, and creating value.

Even with the change already wrought, there’s still a vast frontier of opportunity on the technological horizon.  As with any tool, however, it’s important to remember that our attitude and approach counts as much as—if not more than—the potential that tool has in and of itself. As eloquently noted by T.J. Cook, the CEO of CauseLabs, “in order to truly solve big problems related to the environment, sanitation, education, poverty, and other health and social issues, the ultimate goal must be to change human behavior, awareness, and attitudes.  The role of technology is to serve as a catalyst to jump-start these changes.”