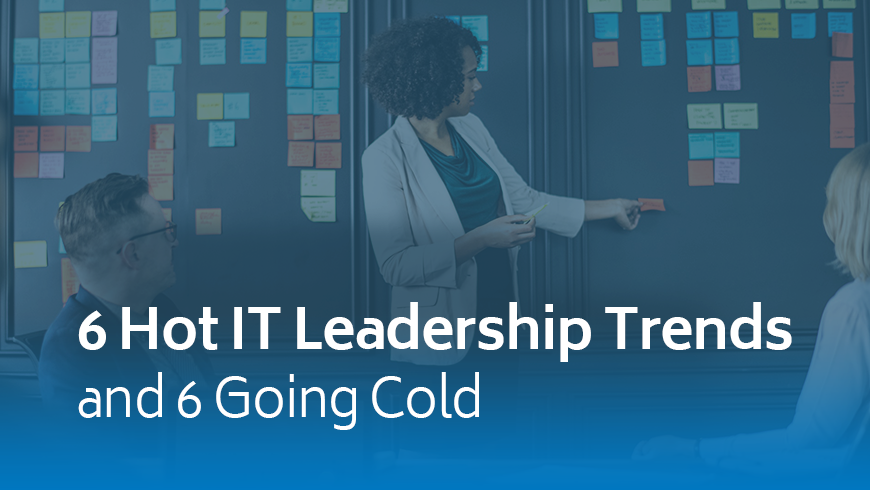 As the CIO role becomes increasingly strategic, risk aversion and a results-oriented mindset take a backseat to increasingly influence and driving organizational change.

IT leadership is changing nearly as rapidly as technology itself. Successful tech executives are shifting toward initiating strategic change rather than acting as trusted operators, as the CIO role sees greater emphasis on leadership skills related to digital transformation over keeping the lights on.

While the spectrum for IT leadership success remains wide, the rules of IT leadership are evolving rapidly, with many organizations seeking masters of digital strategies to helm their IT operations. Today’s IT leaders are being leaned on more for innovation and revenue generation, and to do so, most are shifting their approaches to IT leadership, broadening their influence and emphasizing organizational change.

We talked with IT execs and others about the future of IT leadership to find out which skills an strategies are on the rise — and which are waning.

According to the 2018 Global CIO Survey from Deloitte, a majority of CIOs said that efficient team building was key in helping them succeed in their careers and would continue to be valued in the next few years.

“A company is one team,” says Alexander Rinke, CEO of business software maker Celonis. “Senior leadership should equip employees with intelligent technologies that power greater collaboration and transparency across the organization. It helps break down silos and drive company-wide digital transformation.”

Sten Tamkivi, chief product officer of mobile management firm Topia, advises looking to the “most disruptive” startups in your space to see how they’re navigating the future.

“Be open and adaptive to what the market does,” Tamkivi says. “You’ll be hiring younger staff with less experience, across domains, across industries. It can be uncomfortable, but necessary. Convincing your organization of the change that’s necessary takes skills drawn from your personal network building.”

But even teams that excel can turn into problems without proactive leadership, warns Charles Cagle, CTO for human capital management company Paycor.

“They cost more to acquire and deliver over-the-top results, but will dissolve quickly if not cared for with increasingly interesting and complex projects,” Cagle says. “They thrive on change, process improvement and delivering significant benefits to the business.”

Technical expertise alone, without the ability to detail a vision for the business, is a nonstarter for tech leaders who want to prompt change, says Rocky Subramanian, senior vice president and managing director of the Midwest region for SAP.

“Startup founders know this well,” Subramanian says. “Strong pitching skills are essential to gaining customers, funding and recruiting the best talent. VCs and angels invest in the potential of a team — not just the idea behind the startup. A team that works well together and communicates effectively is a better bet than a team that just has the technical qualifications.”

Hot: Bringing in perspectives from outside the organization

“More CIOs will need to embrace the trend of considering firms that aren’t household names,” Lydecker says. “Firms that can augment internal IT teams by accomplishing things they don’t always have the expertise or bandwidth to do. CIOs will need to open themselves up to new ways of thinking if they expect to keep up with the rate of change, and they can utilize the ‘trusted advisor’ community to do that — experts who are committed to bringing forth technology that can be game-changing for CIOs and their business needs.”

“CIOs used to be judged on mitigating risk for an organization and now their biggest risk is that they don’t innovate fast enough,” Lydecker says. “It’s tempting for CIOs to do what they’ve always done, but they can’t follow the same 10-year playbook if digital transformation is the goal.”

“Emotional intelligence doesn’t have to exist across the entire team,” says Doug Barbin, principal and cybersecurity practice leader of Schellman and Co., “if a leader has the ability to gauge their team and their goals, desires, and core personality traits through [behavioral assessment] tools like DISC,” which measures personality traits like dominance, influence, steadiness and conscientiousness. “Being able to understand what drives the team — and how best to interact — goes toward the high-performance component.”