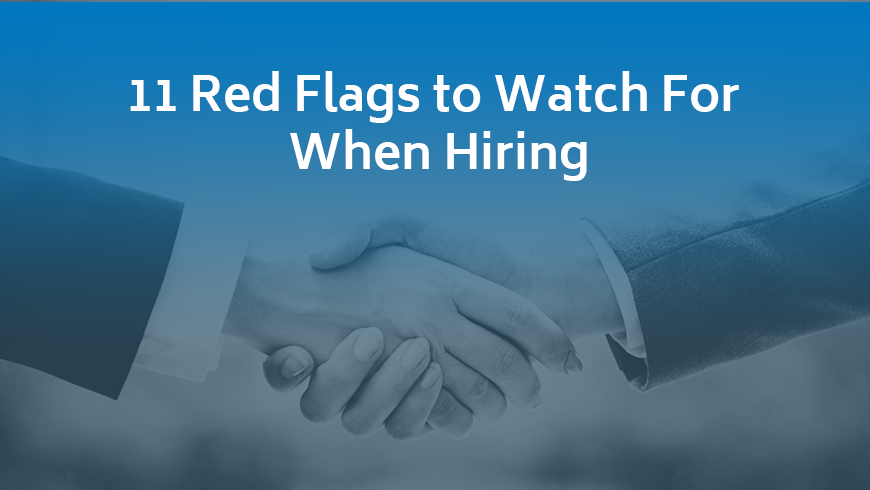 11 Red Flags to Watch For When Hiring

In the battle for top tech talent, the wrong hire can be devastating. So do your tech team the favor of watching out for these warning signs before offering the job.

It’s a hiring worst-case scenario: A job candidate aces every aspect of the interview process, but after joining the company, they can’t get the job done. Or perhaps worse, the new coworker is capable but so disruptive the rest of the team suffers.

It happens. Even when resumes and references check out, the hiring process can still go sideways.

Expert interviewers say that a number of troubling warning signs, when given attention, can help avoid bad hires. And when — perhaps against better judgment — these warning signs are ignored, what follows is discord, missed deadlines and, sometimes, a toxic work environment.

Here are the most frequent red flags, recounted by those who’ve learned to tune in to suspect habits and flat-out deal breakers.

Job candidates are frequently warned to keep things clean on social media when they’re applying for positions. And yet, somehow, even during the window of the hiring process, red flags emerge.

An over-the-top online presence can be a predictor of potential problems to follow in the workplace, says Matt Wilgus, a practice director at Schellman & Co.

“Public personas that excessively disparage people, companies or technologies occur more than you’d think,” Wilgus says. “IT professionals are often passionate about technology, but some comments go beyond a negative review and are something closer to slander. On several occasions, we’ve received resumes from candidates that appear to have the right skills on paper, but their presence online is far too abrasive to join our team.”

Goals aren’t aligned with the company

If a candidate’s career goals are in conflict with the organization’s goals, it’s better to find out up front, Wilgus says. “For example, if the interviewee is looking to perform 100 percent research and our positions are client-facing and development-centric, it isn't a good fit,” he says.

Jaime Laufer, head of people operations for design and marketing firm Digital Surgeons, calls this situation a misalignment of passions.

“The candidate could have all of the required skills and experience and a personality that complements your culture,” she says, “but if their goals don’t align with your organization’s offerings or capabilities, you’ll be really disappointed in a year when the candidate leaves.

“The candidate could have all of the required skills and experience and a personality that complements your culture,” she says, “but if their goals don’t align with your organization’s offerings or capabilities, you’ll be really disappointed in a year when the candidate leaves. It’s important to ask questions about a candidate’s passions and their side projects. Ask them what types of projects they want to work on now and where they see themselves in the future. This can avoid some of those tough situations down the road.”

Matt Wilgus is a Principal at Schellman & Company, Inc. Matt leads the Security Testing and Assessment offerings. In this role he heads the delivery of Schellman’s penetration testing services related to 3PAO and PCI assessments, as well as other regulatory and compliance programs. Matt has over 20 years’ experience in information security, with a focus on identifying, exploiting and remediating vulnerabilities, in addition to extensive experience enhancing client security programs while effectively meeting compliance requirements.